Why Do I Have A Receding Hairline?

When going through old photos, do you notice your hairline seems so much further forward than it is now? A receding hairline can be hard to notice when you look at yourself every day but can be a bit of a shock when you see the difference.

Or maybe you have noticed a drastic change to your hairline in a short period of time and are a little concerned?

Why is this happening to you? Well, let’s see.

As you age, your chances of a receding hairline increase significantly – and somewhat linearly: In their 20s, roughly 20% of guys are affected. In their 50s, it hits 50% – that’s every other man out there. And – you guessed it – by the age of 90, that number hovers around 90%.

Statistically speaking it’s not a question of if, but when. You might be lucky and be part of the minority, but that’s a long shot.

What are the symptoms of a receding hairline?

A receding hairline is not always easy to detect.

You could just have a type of hairline that’s often called the “widow’s peak”, which basically describes a V-shaped growth pattern towards your forehead. There are plenty of guys with a widow’s peak who don’t experience a receding hairline at all. 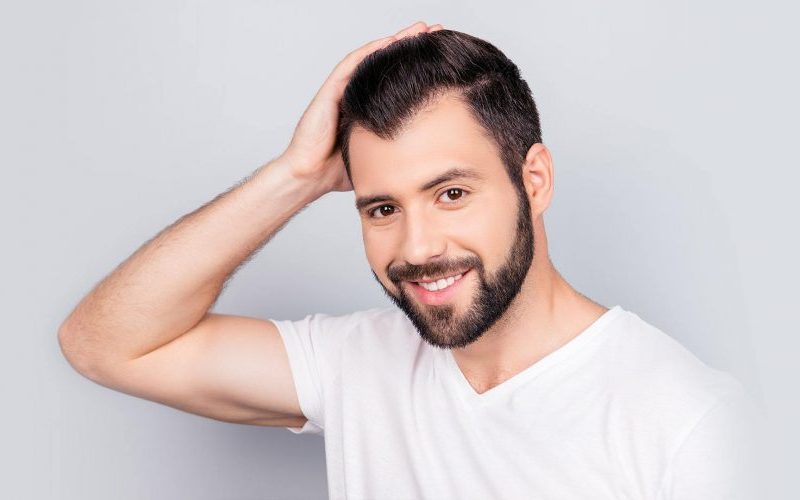 Furthermore, if your hairline is actually receding, it’s usually a slow process. Assuming you’re suffering from typical Male Pattern Baldness and not any unnatural hair loss, the hairline literally recedes over multiple decades.

Once happening, the symptoms of a receding hairline are plain to see: The forehead “grows”. This is sometimes prefaced and often accompanied by thinning hair on the top and above the temples (the latter leading to the confusion with the widow’s peak).

If your hairline is receding, the hairs are slowly falling out and not growing back. That leaves smooth skin on a growing forehead, usually best measured by taking regular pictures and analyzing the progress.

What causes a receding hairline?

The receding hairline observed in Male Pattern Baldness, or Androgenetic Alopecia, seems to follow certain genetic lines. If you observe a majority of male family members going bald in a slow but steady fashion – on both mother’s and father’s side, by the way – there’s a good chance the condition will affect you as well.

The actual culprit of a receding hairline is called Dihydrotestosterone, or DHT for short. Not the exclusive reason, but high amounts of this androgen (male) sex hormone have been scientifically linked to Male Pattern Baldness. And while this fact makes DHT appear downright evil, there are actually significant upsides to high levels of DHT: Well-regulated blood sugar levels, increased sex drive, significant anti-anxiety properties, and – wait for it – increased and stronger body and facial hair growth.

Yes, you read that right. The very hormone that makes your hair fall out also allows you to rock a mighty beard. 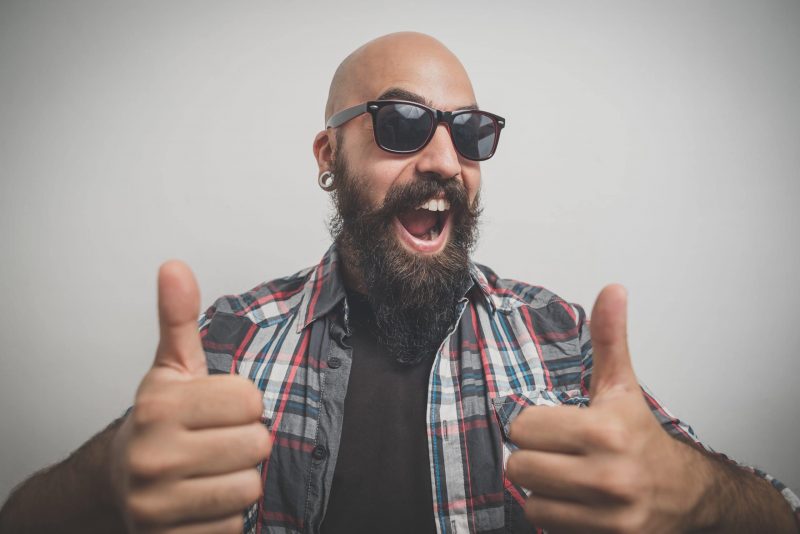 How is a receding hairline diagnosed?

A receding hairline is best diagnosed by a dermatologist. Even though irregular causes such as high levels of stress or a skin disease are quite easily distinguishable from a naturally occurring Male Pattern Baldness, an expert’s advice will provide you with peace of mind.

To determine the reason for your receding hairline, a medical professional may ask you about your personal as well as your family medical history, which helps determine the cause of the hair loss. They may also perform what’s called a “pull test”, literally pulling out a few hairs from your scalp, to determine how well they are anchored in the follicles.

In case the receding hairline and associated hair loss are suspected to be of an irregular nature, further tests may be required. These may include a biopsy of scalp tissue or hairs to test for signs of an infection or disease. You could also take a blood test to check for such things as thyroid disorders, which are proven to cause irregular hair loss.

How can a receding hairline be treated?

Yes – a receding hairline can be treated. And in the case of irregular hair loss, by all means, follow medical advice and get the best treatment available.

In the case of Male Pattern Baldness, there are three ways a receding hairline can be treated.

The first one is artificially lowering DHT levels by preventing testosterone from being converted into DHT, usually by ingesting what’s called a DHT blocker. Named Finasteride (Propecia), these pills have been proven to have some effect – and also some potentially unwelcome side effects.

The second one is stimulating the actual scalp using a vasodilator such as Minoxidil (Rogaine). Applied directly to the scalp, it widens the blood vessels, facilitating the flow of blood to the hair follicles. This increased blood flow, in turn, delivers more oxygen and nutrients to the hair follicles, possibly promoting hair growth.

The third, arguably most drastic but also most effective way to treat a receding hairline is surgery: Small sections of scalp including hair follicles are removed from the back and side of the head, areas typically not affected by Male Pattern Baldness. Implanted in the bald areas, these follicles continue producing hair, effectively restoring healthy hair in those areas. 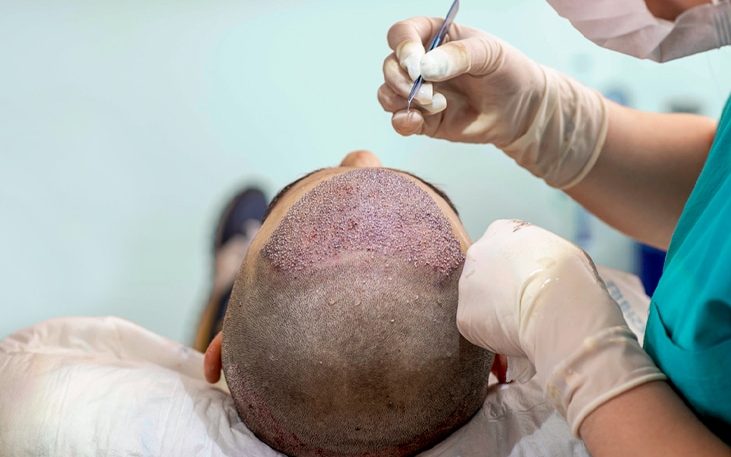 Can a receding hairline be predicted?

There are no 100% reliable predictors for a receding hairline.

Looking at the other men in your family helps: If a majority of males on both sides of your family have gone or are going bald, chances are you’ll do so as well.

There are also certain tests, such as testing your levels of DHT, that can serve as an indicator of how likely you are to go bald.

But both of the above only help to predict Male Pattern Baldness. If you’re wondering about other causes for a receding hairline – there is literally no way to know, as the reasons for irregular hair loss are much too varied and individual to provide any useful patterns.

Should I worry about my receding hairline?

If you’re experiencing irregular hair loss, and can literally see your hairline receding before your eyes, by all means, consult a medical professional for advice.

If you’re simply a part of the vast majority of men who will experience a receding hairline over the course of their life, there is no reason to worry. And while there are possible treatments as mentioned above, the fact that something can be stopped does not necessarily mean it should be.

A growing number of men are not only accepting, but boldly embracing baldness. Save yourself a lot of worry, money, and discomfort – consider going bald.

Use our baldness prediction tool to see what you’d look like.

There’s a good chance you’ll love it and never look back.