What You're Up Against & The First Step Forward 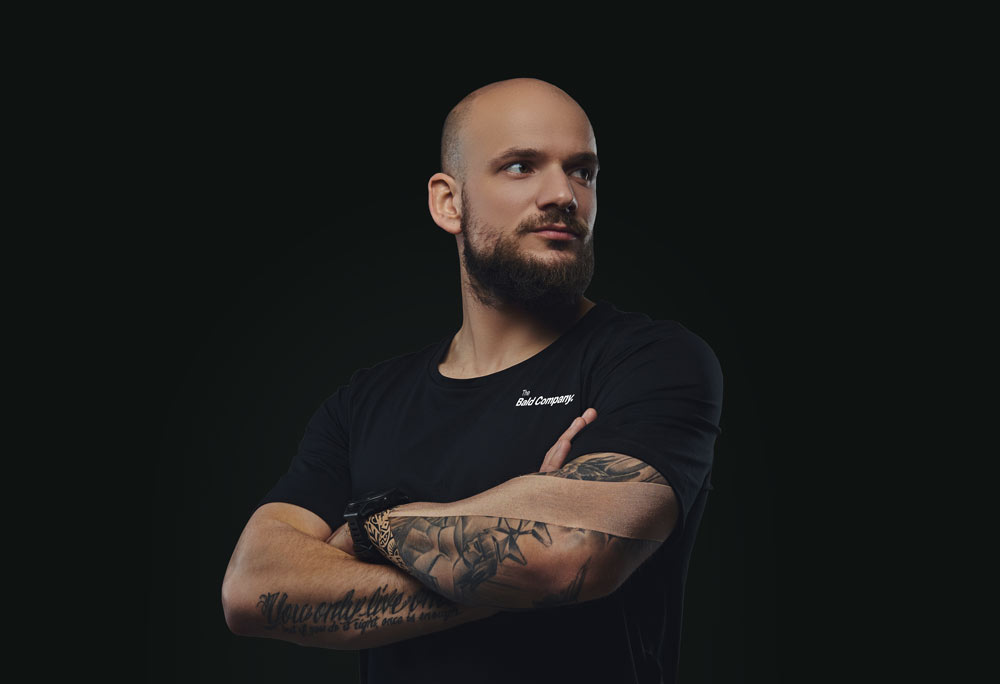 Welcome to Chapter 2 of Losing To Win where we look at why we fear going bald and how to undo all of that mental conditioning and take your first step towards being a bald winner.

Have you ever stopped to think about the stigma society attaches to going bald?

Just think about it for a second.

But why? What is about going bald that is seen to be so terrible?

I’ll rephrase it to give you a hint….Why is having hair good and being bald evil?

We’d say this is most likely the root of the problem.

You’ve got the ultimate depiction of good and all that is holy, the son of God, as a man with impossibly luxurious hair.

Meanwhile the devil, satan, lucifer, resident of the lake of fire, has super hairy legs but nothing on top but a couple of horns.

With baldness being associated with the general representation of evil, it’s no wonder a chrome dome is pop culture’s go-to look for the bad guy.

Baldness is also shorthand for nasty, mean, stupid, inferior or generally any character who exists to be mocked or reviled?

It’s ‘when’ we are exposed to these constant images.

It’s not just Thanos or Voldemort or Lex Luthor.

And they’re just the obvious ones.

In storytelling, you need characters with different motivations and impulses to create conflict, tension
and keep the story moving. In stories aimed at kids, these characters aren’t subtle. They’re obvious,
exaggerated, and, for want of a better word, cartoonish.

In The Wind in the Willows, character-wise, you’ve got a Mole, a Toad, a Rat and a Badger.

Is the Badger bald as a badger? No. He’s the wise elder.

Is the Rat cunning, sneaky and dirty? No, he’s the friendly neighbour.

Is the Mole a spy? Nup. He’s the young, naïve main character.

But Toad, the only one with no hair, is an entitled, irresponsible idiot. The only character with obvious
negative traits.

In Disney’s The Jungle Book there are three bald characters.

The main one is Kaa the snake who is always trying to eat the main character and failing dismally for comic effect. The other two are credited as Slob Elephant and Gloomy Elephant.

As the saying goes, throw enough mud and some of it is bound to stick.

Let’s look at hair as a symbol of physical strength and virility.

From Sampson (who got his strength from his hair) to the Solo Man, we’ve been raised on images of manly men with loads of hair doing manly, hairy things.

Conversely, having your hair shaved off often symbolises a form of castration, dehumanisation or a stripping of your individuality.

But does all this symbolism – which is all well and good – actually affect us in the real world? Do we respond more favourably to people with hair? Does affect who we’re friends with, who we trust or who we vote for?

Australia has had 30 Prime Ministers since federation. 4 have been partially bald at time of taking office – although you could make a case for the current one to stop kidding himself and shave it off.

3 of those 4 PMs lasted less than 2 years. Only one of them was re-elected.

America hasn’t elected a bald President since 1953 and even he had a combover.

Coincidentally, in that time, five balding opposition candidates have lost. Politicians might have authority
and responsibility but are they trustworthy?

Newsreaders and news anchors, on the other hand, are specifically selected for their trustworthiness, authority and appeal. Can you name three bald newsreaders?

All of this anti-bald, pro-hair propaganda creates false perceptions, stereotypes and myths.

And the big one, losing your hair makes you less attractive to a potential sexual partner.

Baldness is NOT a dealbreaker when it comes to finding a partner. It’s not even the tiebreaker.

In fact, whether you have hair or not barely breaks into the top 10 of things people notice about others – and in that case, it’s if it’s well looked after– not if it exists.

On top of that, excessive hair is routinely in the top five no-nos of what people look for in a partner.

For the record, here’s what makes you attractive: confidence, personal hygiene, kindness, genuineness,
a sense of humour, ambition and humility.

You could have best head of hair in the world and still not get laid because you’re a bit of a dick who’s rude to wait staff and you smell like cheese.

From the day you first noticed you were losing your hair you’ve been burdened by centuries of fairy tales, propaganda and perpetuated lies.

Losing your hair made you no more evil, mean, inept, loser-ish or devilish than you previously were with
hair. You might have felt one or more of those things – but it’s only because that’s what you’ve been led to believe all your life.

We’ll be working on a number of key areas that will help you shape the new bald you in later episodes, but
the important first step is to understand this:

Going bald will only affect your life as much as you let it.

If you want to let it consume you and bring you down, it will.

But if you want to use it as a chance to emerge as a better, sharper, more-aerodynamic version of yourself, you can definitely do that too.

Because once you own your baldness, no one can take it from you.